coming through the snow covered lowlands before castle hill

I took the day mostly off from studying to spend time with friends and enjoying the beauty of castle hill. Has an early night the night prior since the festivities of Guy Faukes day got rained out. Instead of a BBQ and fireworks with folks I procrastinated studying at home and did a bit of sphere-play before a relatively early bed. Which meant a relatively early morning, during which I said fairwell to Fabian the austrian couch-surfer of the last month, made a huge serving of porridge, made tea and forgot to drink it, and started to read an glaciology article. The ducks were up though and I soon abandoned study to play with them.

Liz arrived shortly with Max and Abby and Rosa. We gathered in the lounge and watched the ducklings eat and run around in the middle. They are from a farm and pets really, Rowena just looking after the few week old critters for the weekend. Rosa was excited at first, but soon lost interest, while us adults were gigling away at the silly antics of the ducks. They started sprinting hither and thither: one doing laps around the towel on the floor, the other just charging strait across and then back again, sometimes blasting through the water bowl and spilling the water all over. Occasionally a yellow fuzz ball would trip over the edge of the tupperware container full of food and do a face plant into food-yummy. They huddled together at times, linking puffed out chests and flapping tiny underdeveloped wings.

But time to go, so we piled in the car and off to castle hill! The way had shortcuts (obvious and non), coffee and scone, DJ, sitting on the roof, snow covered hills at porters pass, and our arrival to blue skies at castle hill. The sun started coming out in bits as we settled into a spot. Weather had been rain and snow the past few days but the rocks were dry, the air dry and cool, and the breeze mitigated amongst the boulders. We were late in arriving but so were others, and Richard’s car wasn’t there. The spot matt wanted to take us to was taken, but we went back later. A kid from Ywam joined us as we tackled some easy things, and lent us a second pad in the process. All short stuff, but descent and I had fun just moving around and trying things.

Rosa and I also went on some little adventures. Off to get on top of the boulders (so many of them have an edge that can be walked up). To look into the potholes pockmarking the tops of them. stopping at some of the water filled ones to splash a bit, to skip some flakes, to test water temperature. We settled into some nice round bowls that cradled our rumps and backs perfectly, taking in some sun. Then to check if there are lions in the shrubs growing in the shady nooks of any boulders. I found a nice grassy patch where the boulder band-shelled over to form a nice shelter, but Rosa thought the grass was wet. 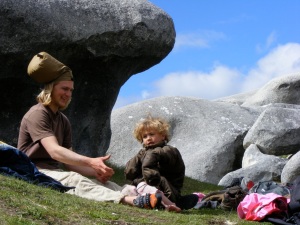 Some more climbs, attempts to establish enough friction to wriggle past overhanging hold-less mantels. Shoes were swapped, and I found a pair sizes too small that just fit… and had potential to break in well, but I’ll keep to my own while they last. Shared lunch as well. no knives lead to the use of celery for spreading humus and peanut butter. We tackled a crazy odd problem in this massive bowl that arched over us. only matt could top out (I might have if id given it a few more gos) as you needed the right bit of length and flexibility to first balance eon a ledge, then spread legs wide underneath, and again slightly above before going for a tiny finger pocket and then a delicate thrust to the lip of the bowl. cool.

Rosa also got some climbing in. Hanging off a nice jug for a bit. Working her way up a bit of friction slab, even working through a set of pockets. We also pampered her as a princess and lugged her halfway across the quantum as she sat divinely in the crash pad. Only to get to an area of really easy but high ball climbs. I fooled around. but then we moved on. 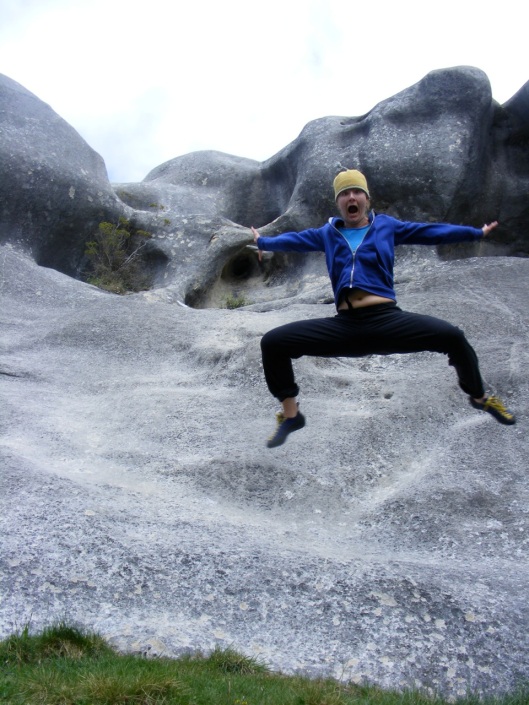 At the end of the day I shot off to look for Margaret’s necklace, and stumbled across Richard. He and Chris had come late to the hill again but were on a sweet balance and dyno problem. I showed them the alternate approach and then went to rejoin the others as we raced to the car to get back to Christchurch for pending engagements. Rosa fell asleep in the car and of six or seven who had wished to visit castle hill and then meet Hailey at Krishna Fest I was the only one to go. Twas a fine kirtan and good food. After I had a fine walk as people set off fireworks on surrounding streets. And they have good ones! proper mortars that you can see halfway across town.

Photos above courtesy of Elizabeth.

Juan tackles the balance dyno problem on a previous trip.

2 thoughts on “some castle hill”

- - day to day musings - - Portland, OR Your comments are always greatly appreciated.

All images are available for sale. Please contact me for availability and pricing.